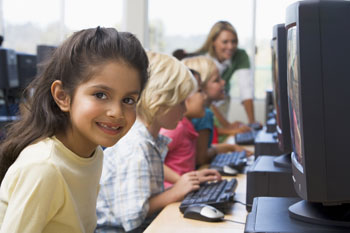 You know that the Constitution carefully divides powers among the national and the state and local governments. But recently there has been a trend toward concentrating power and responsibility at the national level of government. Here is an example of how that can happen.

Providing education is the responsibility of the states. But the cost of education is high. For example, many people agree that, in order to provide a solid education, U.S. schools and libraries must be connected to the Internet. But the expense of equipment, wiring, and Internet access is more than many local and state governments can afford.

That’s where the national government stepped in. President Bill Clinton signed into law the Telecommunications Act of 1996. It set up a fund to help schools and libraries buy Internet-related products and services at a specially discounted education rate, nicknamed the E-rate.

Some representatives tried to place limits on the fund. They wanted to pass a law that would deny the E-rate to any school or library that did not use filtering software. Filtering software limits what can be accessed on the Internet. However, librarians and others argued that policies about filtering were best left to the local governments, such as library boards and school districts. Eventually, the government officials dropped the filtering idea.